Adam picked up this clean GC8 7 years ago and as the second person to have the pleasure of owning it. The car rolled into Adam’s garage with very mild mods consisting of a set of King low springs and a cd player.

Adam had this to say about his ride:

“Since I’ve owned the car I have slowly replaced parts as they've broken to performance parts when possible. First on the list was tint for the windows. Then a short shift kit. After that I had the clutch replaced along with adding a 22mm rear sway bar.”
“About 5 years on and I had a slight miss hap with a sign post which made me put the car into the panel shop for a new paint job and replaced the damaged panel. While it was in the paint shop, I had a roof scoop fitted, 02 sti bonnet scoop and a 22b style wing. Whilst all this was being done, I had bought some STI 18" wheels to be fitted along with a 6 point roll cage.”

“Just before going into the paint shop I fitted 02 STI seats, an in car UHF, custom pod for rally lights, custom stereo, front strut brace, Bilstien STI Prodrive shocks, CAI, alarm, kill switches (2 of, just to make sure no one could steal it), and a UNI chip (running on 18 psi) making approximately 160kw atw's.”

“The car has been used for autocross/dirt sprint days plus some track days, driver training days, and has also seen the 1/4 mile. My best time for a 1/4 mile is 13.3 with the stock turbo, stock top mount and stock internals.”

“The car is pretty much finished on the outside, it's now just down to doing the gear box to suit a new motor I hope to build. The car will eventually become a pure track car. I’m aiming to build a new motor to make around the 600hp mark. It will be purely for tarmac track days. Only time it will see dirt is for fun times on infrequent occasions.”

“Many thanks must go to Racing Evolution in Ipswich for doing the gear box recently, plus Michael from Scorpion Subaru for all his wealth of information to guide me along the way. CnJ for dyno tunes and lastly my fiancé for never allowing me to sell my car. Even when times were tough, and I thought I’d have to get rid of it to make ends meet, she refused to let me part with it.” 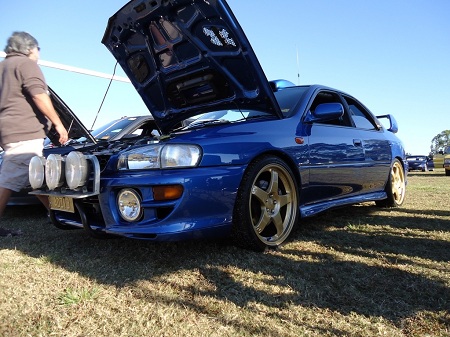